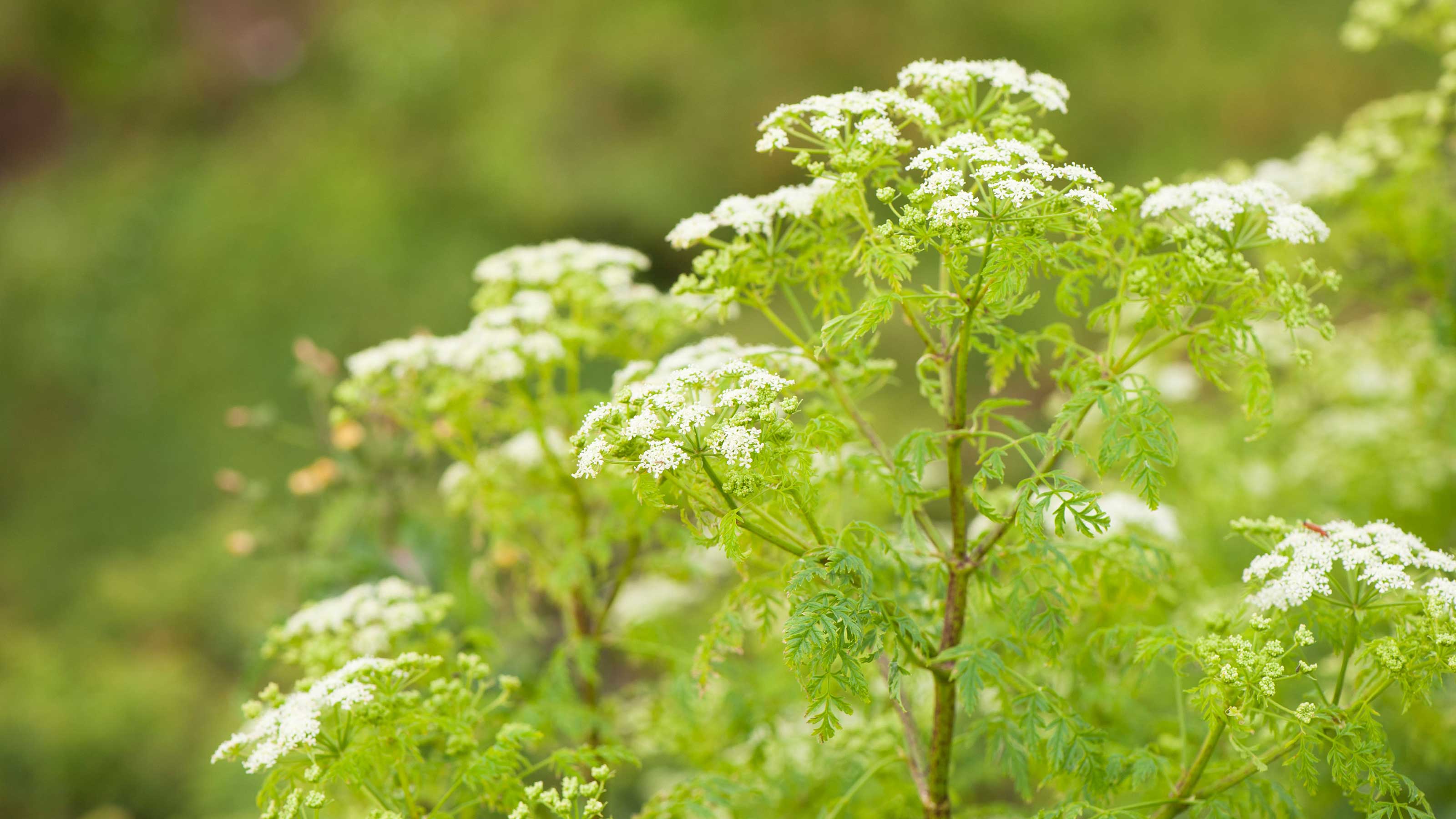 Having a poison hemlock plant in your garden is not only a nuisance but can be very dangerous. It has the ability to make people sick, and it can also be a danger to pets. In order to protect yourself, you need to know how to control the plant. Here are a few tips.

Symptoms of poison hemlock plant include trembling, dilated pupils, muscle paralysis, and respiratory failure. It can also be fatal. If you have these symptoms, you need to seek medical attention immediately.

It is important to understand that hemlock plants contain toxic alkaloids that are absorbed through the skin and respiratory tract. These toxic alkaloids can cause paralysis, dermatitis, vomiting, and nausea. They also affect the nervous system and cause respiratory failure, muscle spasms, and seizures.

The symptoms of poison hemlock plant vary depending on the amount of plant ingested. In general, the first symptoms appear within 20 minutes to three hours after ingestion. These symptoms include nervous trembling, dilated pupils, coma, and acute respiratory failure.

There is no known antidote for the poison hemlock plant. Treatment includes supportive care, such as decontaminating the gastrointestinal tract, securing the airway, hydration, and ventilation. If you experience respiratory failure, you may need to be on a ventilator for a few days. The treatment also depends on the severity of the illness. If the victim does not have adequate fluid intake, intravenous fluids may be given to restore nutrient levels.

The plant is also toxic to animals. It is particularly dangerous to livestock. In addition, the poison hemlock plant is known to cause acute rhabdomyolisis, a condition that causes renal failure.

In a report, a six-year-old girl was found to have a burning sensation in her mouth and a tremor in her hands. She was admitted to the emergency room.

Poison hemlock plants can be difficult to identify. They can look like carrots or Queen Anne’s lace, two other carrot family plants. Wear gloves and a mask when handling them. The stems of the plant are hairless and hollow. They have red or purple spots on them.

The plant’s leaves are segmented, like ferns, and have a lacy appearance. Its flowers are umbrella-shaped. The plant has a musty smell. It can be mistaken for many other wild plants.

Poison hemlock is one of the most dangerous plants in the world. It has no known antidote, so it is important to be alert and seek medical attention immediately if you suspect you have been exposed.

Using herbicides to control poison hemlock is an effective way to prevent the spread of this invasive weed. The chemicals in the plant are highly toxic to humans and animals. They affect the central nervous system and reproductive system, and can be fatal if ingested.

If you’re trying to control poison hemlock, you should apply herbicides in the fall, before flowering begins. Most effective herbicides for poison hemlock are 2,4-D + triclopyr and glyphosate. These herbicides can be applied in the rosette stage and the stem elongation stage.

Poison hemlock grows as a biennial, which means that it will come back the following year. To control poison hemlock, you need to eliminate the plant as soon as possible. Mowing the plant or other equipment can spread the weed, causing it to re-grow.

Poison hemlock is a member of the Apiaceae family. It has hairless, hollow stems and glossy, dark green leaves. It grows in pastures and fencerows. It produces abundant seed.

The seeds of poison hemlock are round and lined with wavy ribs. Each seed is deadly when eaten. The seeds can remain viable in the soil for several years.

Poison hemlock is native to Europe and western Asia. It was introduced to the United States in the 1800s as an ornamental garden plant. The plant’s toxic components have been found to be harmful to cattle, goats, horses, humans, and other animals. The plant’s toxicity can be dangerous for humans and livestock, especially if they eat the plant.

The plant grows as an annual in areas with above-average temperatures, in moist conditions, and in disturbed areas. It is also commonly found in pastures, along roads, in ditches, and in waterways.

The plants can be controlled mechanically by removing the entire taproot. If no wild parsnip is present in the poison hemlock, hand-pulling can be an effective management method.

Growing in a garden

Whether you’re planning on growing poison hemlock in your garden or pasture, there are certain tips you should follow. This plant is extremely toxic to humans and other animals.

This biennial weed is native to Europe and is now an invasive weed in North America. It can spread into areas where people are likely to walk. It thrives in moist soil, such as those found in fields and along streams.

Poison hemlock can kill livestock and people, and is one of the most poisonous invasive weeds in North America. The plant can produce thousands of seeds that ripen in late summer and early spring.

During the fall, they’ll remain in a reproductive stage. By the time the winter has passed, the seeds will have grown to a dormant stage.

You should be aware that this plant is poisonous from the seed all the way to the sap. The sap can cause welts, blisters, and dermatitis.

You can use a barrier to prevent the herbicide from entering the surrounding soil. However, you should be aware that this will only work if you don’t have a lot of other plants around.

The best time to control poison hemlock is in the early spring. Ideally, you should begin your control efforts in April.

If you don’t want to use a herbicide, you should consider pulling the plant. You’ll need to remove the entire taproot. However, you should wait for good rain to do this. This will help prevent further poison hemlock spread.

Those who live in areas with hemlock plants should be aware of the dangers. They are very poisonous and can cause serious illness. They can be dangerous to both humans and livestock.

One way to deal with poison hemlock is to remove it quickly. If you think you’ve been exposed, contact your doctor or the local emergency room. You should also wear protective clothing.

Poison hemlock plants are found in most of the United States. They can grow in pastures and waterways. They are usually mixed with other harmless plants.

The plant’s leaves and root can be deadly to humans and livestock. It produces large amounts of seed that can be spread by wind, water, and animals. The seeds are toxic and can cause death.

Symptoms of poison hemlock poisoning include: tremors, muscle spasms, difficulty walking, burning of the mouth and digestive tract, and paralysis. They occur within 30 minutes to a few hours after exposure. They may also cause respiratory failure.

If you think you have been exposed to hemlock, you should see your doctor immediately. You may be given intravenous fluids to prevent dehydration. You should also seek mechanical ventilation if necessary. You may also be prescribed antiseizure medication.

Poison hemlock plants can cause death and respiratory failure. The root and leaves are particularly poisonous in spring. They contain g-coniine, a compound that causes respiratory paralysis.

When poison hemlock plants are removed, they should be disposed of in sealed plastic bags. You should wear protective clothing and gloves when handling plant parts.

Herbicides can help with hemlock control. They work best if applied in the fall. It’s best to avoid spraying in rainy or windy conditions. Make sure to follow the directions on the herbicide label. You should also avoid spraying within 60 feet of water bodies.

Herbicides may be available in your local office of agriculture. You may also need a state permit for aquatic herbicides. You should also watch for new seedlings.

If you suspect that hemlock plants are growing in your area, you should contact your local authority. You may also be able to receive assistance with removing them.