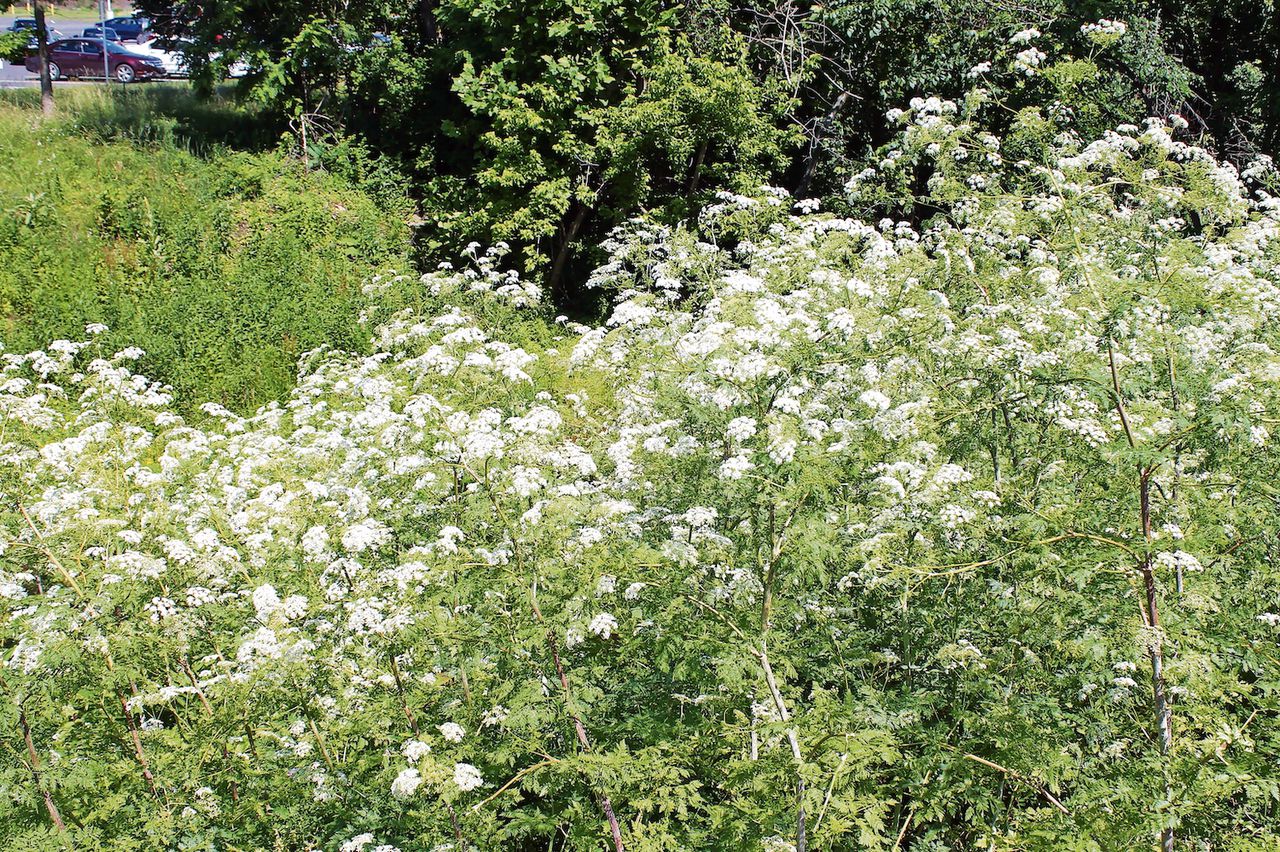 Fortunately, there are many things you can do to protect yourself from the dangers of poison hemlock. One way to do this is to keep your house free of hemlock plant branches. Another option is to use chemicals to get rid of the plant.

Symptoms of hemlock poisoning include muscle twitching, dilated pupils, and weakness of the respiratory muscles. If you suspect you have been exposed, seek immediate medical attention. The condition can lead to death.

The most common cause of hemlock poisoning is eating the leaves or roots of the plant. Although the plant looks innocent, it has toxic compounds called alkaloids that affect the nervous system and the respiratory and cardiovascular systems.

The severity of the symptoms of hemlock poisoning is dependent on the type of plant and the amount ingested. The symptoms may occur as early as 15 minutes after the ingested dose. The symptoms can be more serious if the patient has been exposed to the plant for a long time.

The alkaloids in the plant poison neuromuscular junctions that send messages from nerves to muscle fibers. This can result in muscle paralysis. In severe cases, the patient may experience seizures. If the condition is severe, treatment can include artificial respiration and ventilation. The use of antiseizure medications is also possible.

In addition to affecting the central nervous system, hemlock poisoning can also affect the gastrointestinal tract. The person may have difficulty concentrating and experience excessive salivation. Acute rhabdomyolysis is another potential complication.

The symptoms of hemlock poisoning are similar to those of nicotine poisoning. If you or a loved one suspects you’ve been contaminated, seek medical attention immediately.

Hemlock is one of the most dangerous plants on the planet. It is toxic to people and livestock. It is particularly toxic to livestock. In some cases, cattle and sheep are fatally ill after ingestion.

The symptoms of hemlock poisoning can be severe, including breathing failure and muscle paralysis. The body can begin to fail in respiration within 2 to 3 hours after ingestion. Depending on the severity of the symptoms, the patient may need to stay in the hospital for a few days.

Using herbicides is one of the most effective ways of controlling poison hemlock. Herbicides will prevent the plant from flowering, preventing the seed from being produced.

The first thing to remember when using herbicides is that you should always follow the directions on the label. You should also wear personal protective equipment. In particular, make sure you have a dust mask to keep you from breathing in any small particles.

The best time to apply a herbicide is in the early spring, before the plant bolts into its reproductive stage in the summer. When the plants are in their rosette stage, you can use a broadleaf selective herbicide, such as 2,4-D.

In addition, you can mow or cut the plant with a string trimmer. Repeated mowing will reduce the amount of seeds produced by the poison hemlock.

Before you begin mowing, you should clean your equipment and clothing. You should also ensure that you have proper pasture management. When you have quality feed, animals will be less likely to consume the poison hemlock.

When using herbicides, be careful to follow the recommended rates. You should also be aware of the environmental hazard that comes with spraying herbicides within 50 feet of water. A variety of aquatic herbicides are available.

The most effective herbicides for poison hemlock are 2,4-D + dicamba. These two herbicides are available through commercial applicators, as well as for residential users. Depending on the product you choose, you may need to drain the area.

You can also use other tools to control the hemlock plant. You can use a shovel to dig up the weeds. You may also need to burn the plant.

During the first growing season, the plant grows into a rosette with dark green leaves. Its second year sees the plant develop into a flowering stalk.

After the plant produces seeds, it dies back. The seed capsules are round and contain two ribbed seeds. They are dispersed by animals, birds and flood waters. The seeds stay viable for two to six years.

The plant is very toxic to humans. It contains the alkaloid coniine. It affects the nervous system, causing tremors and death. It can also alter the taste of milk.

In the first stage of toxicity, the person may experience tremors, dilation of pupils and salivation. The symptoms usually appear within 20 minutes to three hours.

The hemlock plant is highly toxic and can kill in a matter of minutes. When exposed to the alkaloid compounds, the person’s respiratory and digestive systems may be compromised. The plant is also poisonous to animals.

The poison hemlock plant is part of the family Apiaceae. It is a biennial that blooms in the early summer. The flower clusters are umbrella shaped. The clusters consist of four to six brown bracts. The petals are small, creamy white, loosely flat tops.

The life cycle of poison hemlock takes two years to complete. The first year the plant remains as a rosette, while the second year it blooms and sets seed. It is a common species.

The plant has fern-like leaves that are finely segmented. They emit a rank odor when crushed. The root is deep and fleshy. The plant can grow to ten feet tall. It is often found near railways and ditches. The plant can be easily controlled.

The most effective way to control the plant is by applying herbicides. These should be applied in a targeted manner to prevent drifting of the herbicide. A second application in the spring is also recommended.

Known as the deadly hemlock, poison hemlock is a highly toxic plant that causes death in animals and humans. It is an invasive weed and grows throughout much of North America and Europe. It is found in meadows, pastures and waste areas. It is an alkaloid-containing plant that is toxic to livestock, wildlife, and people.

Ingestion of poison hemlock causes respiratory failure, which can be fatal. The plant’s alkaloids interfere with the neuromuscular connections in the nervous system, causing the heart to twitch and paralyze the breathing muscles.

The plant’s toxic effects are most severe in the first few hours after ingestion. It is common for the symptoms to appear within an hour, but they can occur as early as 30 minutes.

Ingestion of poison hemlock is particularly harmful to cattle and sheep. In addition to killing the animal, it causes severe fetal deformities. It can also cause cleft palate in infants and offspring. In some cases, it is known to be fatal to children.

It is also known to cause acute renal failure, which can result in death. The plant’s seeds are spread by birds, wind, and water. When animals consume the plant, they will die in two to three hours.

The toxicity of poison hemlock depends on the quantity of the plant that is consumed and the type of animal. The most vulnerable species to poisoning are cows, sheep, and goats.

When the plant enters the body, it contains highly toxic piperidine alkaloid compounds that affect the nervous and respiratory systems. The compounds must enter the human’s nasal passages, eye, and gastrointestinal tract to be toxic.

Ingesting the plant can lead to acute rhabdomyolysis, coma, and respiratory failure. Treatment is supportive care. It may include antiseizure medication, decontaminating the gastrointestinal tract, and ventilation.

Several plant species are known to cause abortion, birth defects and death in livestock. Lupine-induced “crooked calf disease” is a particularly common problem. It is caused by ingestion of toxic lupine during pregnancy.

In addition to being a major threat to the livestock industry, poisonous plants are a serious source of economic loss. The plant species, Western waterhemlock, is one of the most virulent.

Cattle, sheep, goats, swine and all classes of wildlife are susceptible to poison hemlock. Calves are especially susceptible, as are pregnant cows.

Ingesting small amounts of hemlock can cause acute nervous system toxicity. Crooked calf syndrome can occur in cows, swine, and sheep. A single ounce of green leaves is deadly to sheep, but 10 to 16 ounces of leaves are deadly to cattle. The crooked calf syndrome is usually characterized by crooked legs, a shortened maxilla, and a twisted spine.

The Western waterhemlock is known to kill livestock, and it is considered to be the most violently toxic plant in North America. It has a carrot-like odor and produces a highly poisonous liquid from its tubers.

In addition to being a major danger to the livestock industry, poisonous plants can cause severe damage to natural aquatic systems. Water hemlock is a member of the Apiaceae family. It has a branching tuberous root stalk, but lacks a central taproot.

Poison hemlock is a common weed in disturbed areas. It can be disguised in grasses and hay. It can also invade native plant communities.

When it comes to determining the safest way to deal with the plant, it’s best to consult with a livestock poisonous plant expert. Some people recommend burning the plant after pulling it.