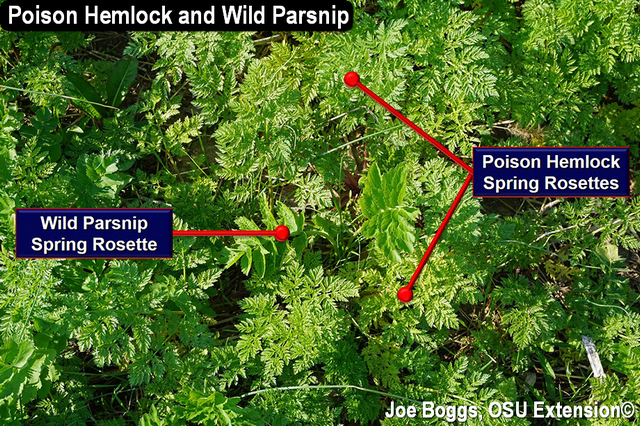 During the summer months, it is very important to stay on the lookout for poison hemlock. Poison hemlock can be a danger to livestock, as it is able to cause poisoning in the animals. Fortunately, there are several steps you can take to protect yourself and your livestock from this danger.

Whether you are pulling up Western waterhemlock or killing it, you need to wear protective clothing. The plant is poisonous to humans, livestock and wildlife. It can cause serious health problems, including convulsions and delirium.

Western water hemlock is native to the Pacific Northwest and the Rocky Mountains. It grows in wet areas such as marshes and irrigation ditches. The bulbous root is slender and hairy. The plant’s leaves are pale green and have sharply pointed, toothed leaflets. It grows from two to eight feet tall.

Western water hemlock is poisonous to cattle, sheep, and horses. When the leaves are ingested, the animal suffers great abdominal pain. It also causes respiratory and digestive irritation. Symptoms of poisoning usually appear within an hour. It is also highly toxic to humans and pets. It causes convulsions and can result in death within two or three hours.

When deciding on an effective method to rid your property of poison hemlock, it is important to know which species are most toxic. Western water hemlock is the most toxic. Its seeds are kidney-shaped and can remain viable in the soil for several years.

To kill the plant, you must remove all the roots. Western water hemlock can be pulled, dug or chemically treated. This method is most effective in the late spring or early summer. You should take care to remove all the plant and to use protective clothing and gloves.

If you are using a pesticide, be sure to read the label carefully and follow the instructions. You may be held liable for damages if you use it improperly.

When killing western water hemlock, you must be careful to remove the entire plant. You should also make sure to wash your hands thoroughly after handling the plant. The plant contains cicutoxin, a highly toxic compound that is harmful to humans.

Western water hemlock is one of the most poisonous plants in North America. Its roots can kill a 1,200-pound horse or cow. The plant’s seeds can also be transported by water.

The plant can be easily identified by its bulbous root. Western water hemlock seeds can remain viable in the soil for several years.

Whether you are looking for information on how to remove spotted water hemlock or how to dispose of it, it is important to know what the plant is and how it can affect you. The plant is extremely poisonous to humans and livestock. It is highly recommended that you avoid handling the plant. You should always wear protective clothing and footwear when working with it.

Water hemlock is a species of hemlock that grows in marshes, ditches, and other waterways. It is one of the most poisonous plants to humans. It produces a toxin called cicutoxin. This toxin binds to receptors on nerve cells. When cicutoxin enters a nerve cell, it causes a series of negative effects. These effects include:

The leaves of poison hemlock are dark green and glossy. They are finely divided and have a fern-like appearance. They grow up to 38 cm (15′) long. They are pinnately divided with three to five leaflets. They have purple blotches and are arranged in an opposing pattern.

Poison hemlock is a biennial plant. It grows in waterways and pastures. It is also a pest that is spread by mowing or other equipment. It is especially toxic to horses, cattle, and sheep.

When working with poison hemlock, wear a face shield and heavy, waterproof footwear. Mow the infested area to remove seedlings and prevent seed production. You should also wash your clothing and equipment.

It is important to identify the plant before you use any herbicide. Many herbicides are effective when applied at the beginning of the plant’s life cycle. If a plant is near a body of water, you should also use aquatic herbicides.

Poison hemlock grows in marshes, ditches, fencerows, and pastures. Its seed is highly toxic to livestock and humans. In fact, it is the most toxic plant in North America. It has been identified in several counties in the Lower Peninsula.

Poison hemlock is also known as “Queen Anne’s lace” and “wild carrot.” It is often mistaken for these common species. Its name is a reference to its white or greenish flowers with a green-white center. The plant’s parsley-carrot-like odor is also similar to these common species.

Symptoms of poison hemlock poisoning in livestock may develop within a few minutes to a couple of hours after an animal consumes the plant. Signs may include nervousness, a cleft palate in the offspring, muscle twitching and breathing muscles that fail to work.

In livestock, poison hemlock ingestion can result in death. It can also cause neurological and cardiovascular symptoms. The most severe symptoms are respiratory paralysis and convulsions.

Poison hemlock is toxic to livestock of all classes. The animals most susceptible to the plant are cattle, goats and horses. However, pigs are also susceptible.

The symptoms of poison hemlock poisoning in livestock usually start within an hour after ingestion. Depending on the amount of the plant that was ingested, the animal may suffer respiratory paralysis, convulsions or seizures. Some animals may also show symptoms of gastrointestinal irritation.

Poison hemlock ingestion can be detected by urine and feces samples. It can also be diagnosed by identifying hay that is contaminated with the plant. There are no antidotes for hemlock poisoning. However, there are treatments that may help to alleviate the symptoms of poison hemlock poisoning. Treatment may include decontaminating the gastrointestinal tract, securing the airway and preventing seizures with barbiturates.

Animals that have been poisoned by hemlock usually die within a couple of hours. However, some livestock can survive. Those that are not recumbent should be given fluids intravenously to prevent dehydration.

Treatment for poison hemlock poisoning in livestock usually involves removing the animal from the area and securing the airway. The animal may also require sedation. If the animal is not recumbent, charcoal may be used to seize it.

Treatment of poison hemlock toxicity in livestock may also include vitamin K and activated charcoal. Other options include gastric lavage and saline cathartic.

If an animal is poisoned, the owner should remove it from the area immediately. If the animal is recumbent, sedation or a saline cathartic may be administered. The treatment is also dependent on the severity of the disease. If an animal has a good chance of recovery, it will be treated with activated charcoal.

Using herbicides to prevent poison hemlock from spreading can be a very effective method of controlling this noxious weed. However, you must be careful and understand all of the guidelines for a herbicide’s use.

Herbicides that are effective against poison hemlock include glyphosate, 2,4-D and metsulfuron. These herbicides work best when applied in late spring or early summer.

Glyphosate is an effective, nonselective herbicide that works on all plants. This is especially useful for small infestations, as it can be applied as a spot treatment. However, you should be careful when using it on pastureland.

A post-emergent herbicide, such as picloram, is also effective against poison hemlock. It can be used to kill foliage and can help increase the palatability of other plants.

Another method of controlling poison hemlock is by mowing. Repetitive mowing can reduce the competitive ability of poison hemlock and help prevent seed production.

Poison hemlock can be an extremely toxic weed to humans and livestock. It produces large quantities of seeds that disperse over a considerable period of time.

It is best to use herbicides to prevent poison hemlock seeds from sprouting. You will need to apply a chemical treatment on a regular basis to reduce the seed bank. You may also need to irrigate or drain the area to ensure that the herbicide is working.

Poison hemlock is a non-native invasive weed that has been spreading wildfire in Greater Columbus in recent years. It is now widely distributed in the western United States.