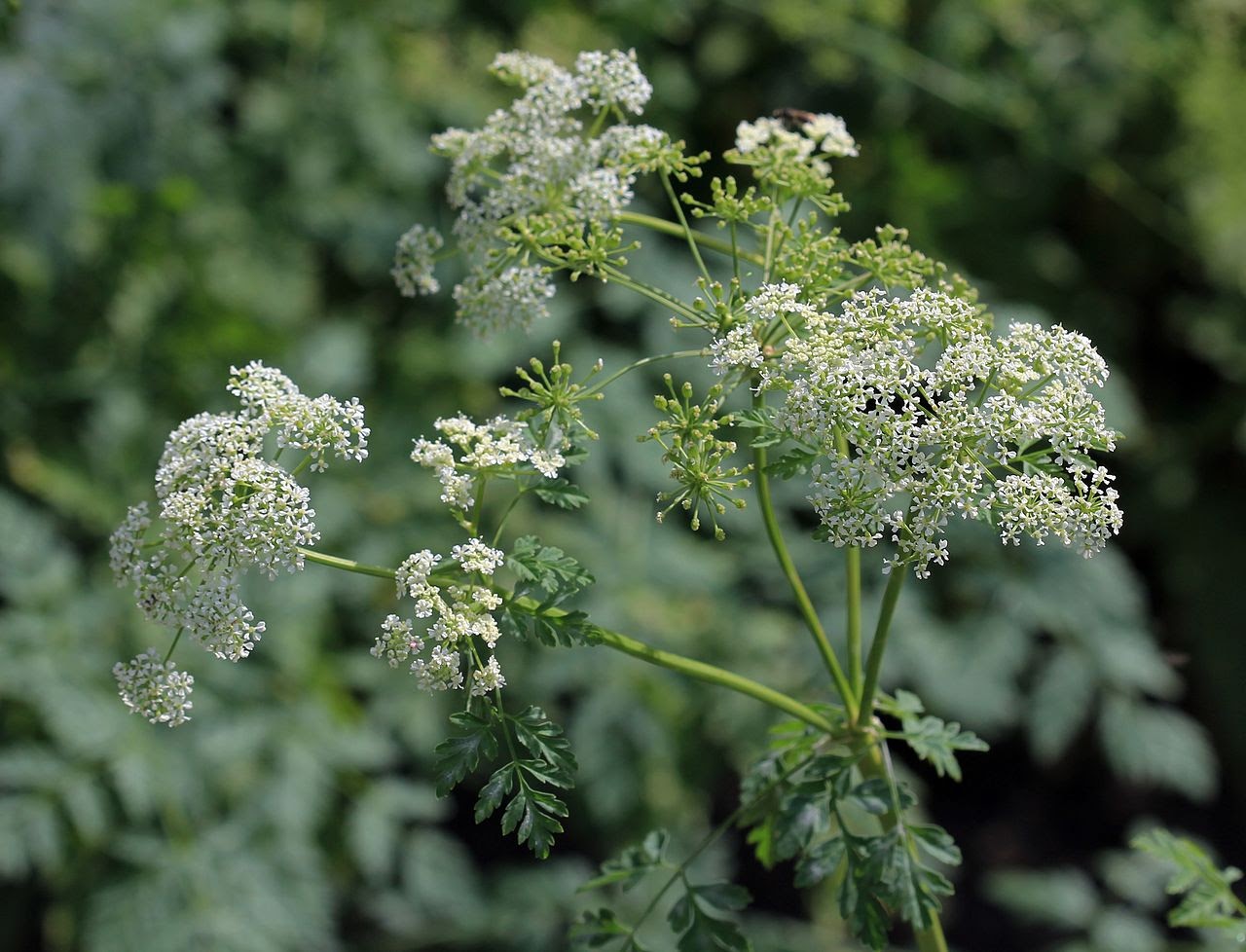 Whenever I hear the term poison hemlock, I wonder where it grows and why it’s so dangerous. Fortunately, there’s a quick guide to answer those questions. Whether you’re looking for information on water hemlock or giant hogweed, this article can help.

Often mistaken for an edible plant, the water hemlock (Cicuta maculata) is deadly. It grows in wet, sandy soils and creeks throughout North America. Its white flower clusters are umbrella-shaped.

Water hemlock is toxic at all stages of growth, but the most poisonous part of the plant is the root. It has a labile, highly poisonous substance called cicutoxin. It is found in immature seeds, leaves, and tubers. The root of the hemlock can be absorbed through the skin.

When cut, water hemlock leaves can release a musky odour. The stem is hollow and is covered with purple spots. The plant has an umbrella-shaped flower cluster that blooms in the early summer. The hemlock grows up to ten feet tall.

Water hemlock is known to be poisonous to livestock. When animals feed on it, they may be poisoned by a substance called cicutoxin. The poison acts directly on the central nervous system. Ingestion of a small portion of the root can be fatal to an adult.

Poison hemlock was introduced to North America by European settlers. It quickly spread across the continent. It is now found in irrigation ditches, cultivated fields, and roadsides. In 1989, the American Association of Poison Control Centers recorded four deaths due to water hemlock poisoning.

Water hemlock has a high concentration of cicutoxin. This neurotoxin is highly toxic and has a carrot-like odor. Symptoms of poisoning include respiratory failure, nausea, and vomiting. It is also dangerous for children. A two- to three-cm portion of the root can be fatal to an average adult.

Water hemlock is most toxic in spring. The rootstalk contains small chambers filled with a highly poisonous liquid. The leaves are divided into lance-shaped, narrow-toothed leaflets. The seed heads are green. The hemlock’s tubers are extremely toxic.

If you see water hemlock in your area, it is important to keep it out of your crops and grazing land. It can be destroyed by grubbing or burning. If you are unsure, contact your local weed control authorities. They can give you specific recommendations.

Avoid areas that are infested with Western water hemlock in early spring. Water hemlock seeds remain viable in the soil for two to three years.

Often called hemlock or poison hemlock, this plant grows on pastures and waterways in the United States and Europe. It is a biennial plant that grows up to 10 feet tall. Its white flowers are umbrella-shaped.

The leaves of the plant are lacy, finely divided, and have a pungent, parsnip-like odor. The leaves are usually purple-spotted.

Poison hemlock grows in pastures and ditch banks, as well as in meadows, fields, fencerows, and vineyards. The plant can be found in different locations, but it is found mostly in the western part of the United States and Europe.

The poison hemlock plant grows on pastures and is a pest that is very harmful to animals. In fact, it can kill livestock. The plant has a high concentration of alkaloids that may also be toxic to humans.

The main alkaloid found in the flowers of the poison hemlock plant is g-coniceine. During fruit development, the alkaloid transforms into N-methylconiine.

The plant is a pest that can be controlled by applying herbicides. Herbicides are most effective when applied in the fall. A spot treatment with glyphosate can also be used.

The main alkaloid found in this plant is coniine, which is also toxic to humans. The mixture of coniine and opium can cause symptoms of tremor, ataxia, atrophy of the muscle and paralysis of the skin. The symptoms can appear within 20 minutes to three hours.

Historically, the plant has been used to treat herpes, rabies, and indolent tumors. Infusions of the plant were also used to shrink breasts. In addition, the juice of the plant was used to treat erysipelas. Socrates is said to have died from poisoning from a poison hemlock infusion in 399 BC.

Poison hemlock is a noxious weed, and it should be controlled on public and private property. The King County Noxious Weed Control Board encourages property owners to remove the plant.

Among the most invasive weeds in the United States is Giant Hogweed, which can be found in both natural areas and urban areas. Giant Hogweed is a member of the Apiaceae family.

Giant Hogweed is a monocarpic perennial that reproduces by seed. The seeds can remain viable in the soil for many years. The seeds are dispersed by wind and animals.

Giant Hogweed can grow to 15 feet tall. It produces dozens of offspring from a single plant. The plant is also a good food source for bees.

If you see Giant Hogweed in your area, contact your local USDA-APHIS office. They will assist you with eradicating the plant.

Giant Hogweed is able to grow in moist, disturbed soil. It can also spread by division, seed dispersal, and by soiled clothing. The plant can be found along roads, streams, and in fields.

The sap from giant hogweed can cause severe burns, and in some cases, blindness. The sap contains chemicals called furocoumarins. These chemicals react with the ultraviolet rays of the sun, causing photodermatitis. Symptoms include burning eyes, blistering, and skin irritation. These symptoms may occur within 24 hours and may last for a few months.

In some cases, blistering may recur over years. If you see blisters, contact a doctor immediately. The plant’s sap can be harmful to livestock, so it is best to avoid contact with livestock. If you are unsure, wear safety glasses or protective clothing.

Giant Hogweed is invasive and can be difficult to control. It is possible to remove the plant, but it can take many years. To learn more about eradicating Giant Hogweed, contact your local county extension office.

If you think you have Giant Hogweed in your area, you may wish to contact your local Connecticut Invasive Plant Working Group. This group can help you determine if you have this invasive plant and can work with you to remove it.

Traditionally considered a Shining Sumac variety, Prairie Flameleaf Sumac is a small deciduous tree that grows in the central Texas area. It has green leaves and pyramidal clusters of red fall fruit. It can grow to a height of about 30 feet, but most specimens will grow to about 20 feet. It is native to the southern Oklahoma, central Texas and west Texas regions. It is heat-tolerant and has an attractive, pale trunk. It is generally pest free, but its reproduction can be a bit aggressive.

Prairie Flameleaf Sumac grows in a variety of soil types, from arid deserts to limestone soils. It can grow in open woodlands or as an understory tree in woodlots. It is a relatively fast-growing plant, but it is not as vigorous as Evergreen Sumac. It has a pale trunk and produces green leaves throughout the summer. In the fall, the tree produces pyramidal clusters of red fruits that can be soaked in water to make a tasty tea. This plant is relatively pest free, but eradication may be necessary if it begins to spread.

Like all native perennials, Prairie Flameleaf Sumac uses up large amounts of water. However, it is also a nitrogen fixer. This is a good reason to plant the plant if you are looking for a source of forage or soil improvement. It grows well in heavy soils, and it can persist in recovering prairies and grasslands. It is also planted for soil erosion prevention. It can grow up to six years under ideal conditions. It is also very adaptable, and can tolerate flooding for up to 20 days. The leaves are green in the summer, turning to deep red in the fall. The tree can be pruned to a more ornamental shape. It is usually sold as an ornamental tree, but it cannot establish in cold temperatures. It is not considered a major alterer.

The plant’s naturalized form, called Japanese maple, is widely sold as an ornamental tree. However, it cannot establish in most parts of the United States.